Clindamycin is primarily used for various skin infections in human and veterinary care. In its chloride salt form it is taken orally via capsule. It has an average half life of 2.4 hours in the human body. Other forms are more likely to be used topically. The compound was first made in 1967. It is named among the World Health Organization’s List of Essential Medicines. It is now prescribed more cautiously, because it can kill gut bacteria leaving a vacuum for C. dificile to spread.

The compound eliminates bacteria not by killing them outright but by interfering with their RNA replication causing them to be unable to reproduce.

The parent compound is Lincomycin which is derived from Actinomyces lincolnensis. Lincomycin has a hydroxyl group which is removed using a substitution reaction to place a chlorine atom in the 2 position. Due to the fact it is made from an altered natural compound it is classified as semi-synthetic. 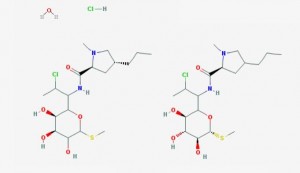 Blue has a partial positive charge and Red has a partial negative charge. Green is neutral. Hydrogen in water molecules will align toward the blue and oxygen on red. Hydrogen bonding will occur primarily around the hydroxyl groups and nitrogen atoms.

The chlorine atom in the 2 position is what differentiates it from the parent compound, Lincomycin, which has a hydroxyl group in its place. A substitution reaction is used to form Clindamycin.