Each group consists of four H arranged in near perfect tetrahedral geometry around a central N. (Mean O–N–O, 110°; compare with angle subtended by an edge at the center of a tetrahedron, 109.1°; mean N–H, 0.92 Å.) Three of four H atoms in each group are hydrogen bonded to either O of nearby water (2.16 Å) or phosphate (1.87 Å)

Each group consists of four O arranged in near perfect tetrahedral geometry around a central P. (Mean O–P–O, 109.6°; compare with angle subtended by an edge at the center of a tetrahedron, 109.1°; mean P–O, 1.54 Å.)

Water “shell” around Mg, 6 oxygen atoms, each from an H<sub>2</sub>O molecule, form an octahedron of (negatively-charged) oxygens and a sphere of hydration around the central magnesium ion.

Oxygen “shell” around NH<sub>4</sub>, 5 oxygen atoms, one from a nearby phosphate group and four from nearby water molecules, form a ‘pyramid’ of (negatively-charged) oxygens and a sphere of hydration around the central ammonium ion (N···O, 2.79-3.23 Å). 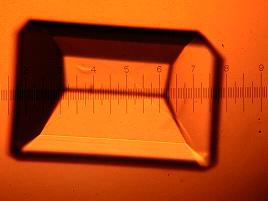 Struvite is a biogenic mineral because the environmental conditions that produce sufficient ammonium and phosphate for struvite to form and persist are almost always associated, one way or another, with biological organisms, and often with decay or putrifaction. Magnesium constituents are often associated with salinity or seawater.

Common occurrences of struvite are in manure, guano, and urinary calculi (usually associated with infection, urea hydrolysis, and high urine pH), as well as canned fish (in which struvite crystals make an occasional unappetizing appearance) and cadavers immersed in seawater.

More recently, struvite has been crystallized out of manure lagoons and sewage treatment plants, usually by addition of Mg and base to high-ammonium and high-phosphorus water after anaerobic digestion, as part of efforts to recycle phosphorus from the wastestream and to reduce phosphorus contamination of surface waters.